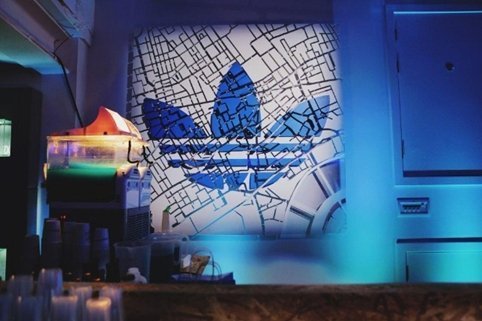 Adidas has opened a new London Adidas Originals flagship, based on a design concept by Sid Lee.

The retail design is based around Adidas’ ‘global neighbourhood’ concept, which ‘aim to be a part of the fabric of the city’s neighbourhood and create a distinct destination’, according to Adidas head of retail environments Ted Mager.

He says, ‘We created our new Originals store concept to celebrate the best features of the space we have and endure we remain part of the landscape of the city.’

Artist Anna Loa has created a feature unit to display highlighted products in the space, which will also host a series of events.

Other creatives Adidas worked with on the store and its launch are photographers Charlotte  Rutherford and Nina Manandhar, street artist Malarko, animator Andy Baker and spoken word artist George the Poet.

The store is situated on Foubert’s place, off Carnaby Street.